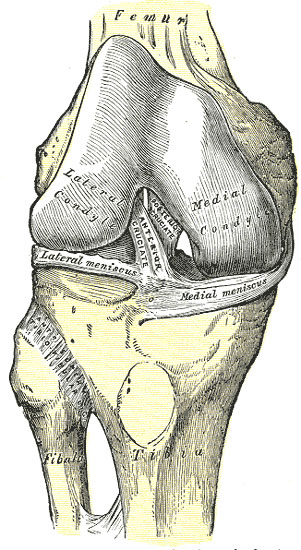 The Knee is a somewhat complicated joint, which involves the highly co-ordinated movement of three bones and a number of muscles and ligaments and two different types of cartilage.

The lower end of the thigh (“distal femur”), upper end of the shin bone (“proximal tibia”) and the kneecap (“patella”) are lined by a layer of extremely low friction cartilage and lubricating synovial fluid. The femur and tibia are linked by four ligaments, a medial (inner) and lateral (outer) collateral ligament as well as an anterior (front) and posterior (back) cruciate ligament in the centre of the knee joint. The patella is attached to the upper part of the knee joint by its muscle attachment to the Quardriceps muscle at the front of the thigh, and to the lower part of the knee joint by the patella tendon which joins onto the upper tibia. The patella is kept in place in the knee by a combination of structures such as a groove (the “trochlea”) in the lower end of the femur as well as a series of small ligaments and muscle attachments that act as active and passive checkreins to keep the patella towards the centre of the knee and stop it from dislocating from its natural femoral groove.

There are also two menisci – these are small semi-circular rings of fibro-cartilage, one on the inner (medial) side and one on the outer (lateral) side of the knee joint, that are attached to and sit on top of the tibia. They act as shock absorbers, distributing force evenly from the femur to the tibia during impact and loading, as well as helping to restrain the femur in the correct position relative to the proximal tibia during bending and gliding movements in the knee. Lastly the entire knee joint is surrounded by a tough capsule which houses most of the inner structures of the knee (except for the two collateral ligaments), and has an inner lining of synovium which produces the normal lubricating fluid in the joint. The joint can also be thought of as functioning as three adjacent compartments – the medial tibio-femoral compartment is on the inner half of the knee between the lower end of the femur and the upper end of the tibia, the lateral tibio-femoral compartment on the outer half of the knee, and the patella-femoral compartment between the back of the patella and the central trochlear groove on the front of the distal femur.

Not only does the knee bend (flex) and straightens (extend), but during everyday activity it will also allow the femur to glide (translate) forward and backward on top of the tibia, and it will also allow the femur to rotate inward (internal rotation) or outwards (external rotation) relative to the tibia if the foot is planted on the ground. Thus it is a joint with potentially complex movements in multiple directions involving multiple bones and moving surfaces. It has relatively little muscle covering the front and sides of the knee and the skin in front can be quite thin, thus it is not particularly well protected.

It is little wonder that the knee joint is frequently injured during sporting activities or simple accidents. When the knee joint doesn’t move in a co-ordinated fashion, there may be repetitive microscopic injury to the moving parts (the lining articular cartilages) resulting in their breakdown. This loss of smooth gliding surfaces may result in uneven, poorly lubricated surfaces and eventually the exposure of bare bone, the formation of fluid-cavities in the bone (known as cysts), and the formation of spikes of excess bone as a response to the abnormal forces being experienced by the surrounding bone – osteophytic spurs. This is then the evolution of arthritis within the knee joint.
The information above is general. All surgical procedures involve some risk. If you would like advice on your specific condition, please contact the office of Mr Daniel Robin, Melbourne Orthopaedic Surgeon.