ACL (and PCL) Rupture and Reconstruction 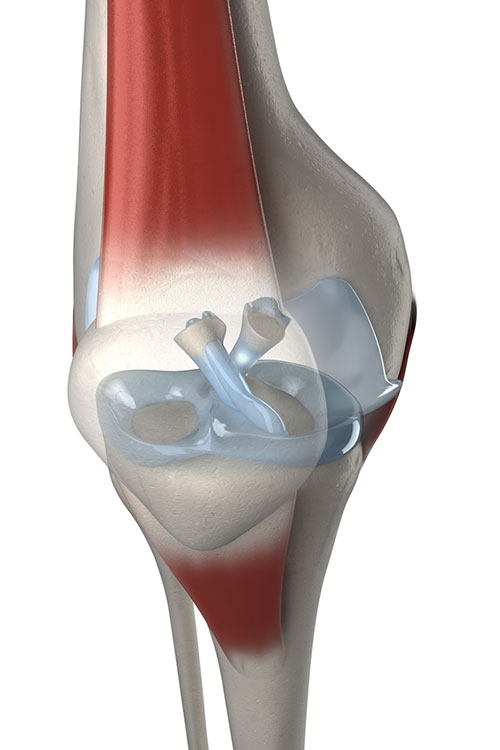 ACL and PCL ligaments of the knee


The anterior and posterior cruciate ligaments are tough bands of tissue in the central portion of the knee that connect the tibia and the femur and prevent the two main bones from sliding or pivoting in an uncontrolled fashion.

Either cruciate ligament can be ruptured or torn by sudden twisting movements of the knee (e.g. when changing direction while running) or by a very heavy blow to the front or sides of the knee.

Symptoms and Signs of Cruciate Injury


At the time of the injury the ruptured ligament will bleed significantly into the knee joint and will produce symptoms of immediate pain usually felt deep inside the knee, rapid swelling within a few minutes and an inability to continue walking, running or bearing weight. These symptoms usually resolve in a couple of days, but the longterm consequences may be an intermittent sense of instability in the knee, where it may collapse, buckle or give way, or that “you just can’t trust it” when walking on uneven surfaces, attempting to run up or down stairs. Frequently there is a sense of instability or even true giving way when trying to change direction while running down stairs, e.g. when running down and around a landing, or upon returning to sport when pivoting or changing direction on the injured leg, or when attempting to land from jumping. This is not always painful, however, at the same time as the ACL or PCL is injured, a high proportion of cases will also sustain a meniscal tear due to the same force being applied to it. Later on, the meniscal injury may be a source of knee pain. Fortunately, this can frequently be addressed, and often has the best outcome, at the same time as surgery for the ACL or PCL injury.

Do I Need Surgery for My ACL/PCL Rupture?


Not all patients with a ruptured ACL or PCL need to have surgery to reconstruct it. Some patients are able to retrain the muscles of their knee with physiotherapy to make them strong and co-ordinated enough to compensate for the lack of function of the injured cruciate ligament. In these cases, surgery may not be necessary.

However, if an associated meniscal injury is symptomatic and repair (as opposed to removal) is considered, it may be best to address the cruciate injury at the same time, as this is associated with a higher likelihood of healing of the meniscal repair, and stabilising the knee would make repeat injury to the meniscus less likely.

In some cases, both the ACL may be ruptured as well as there being a strain of the medial collateral ligament (MCL). Frequently, if the MCL injury is mild or moderate it is often better to rehabilitate from the MCL injury over 6-8 weeks, using a brace and physiotherapy, and once this has healed, then the ACL may be addressed surgically. This reduces the chances of developing post-operative stiffness.


Mr Robin performs ACL reconstruction as an arthroscopically assisted procedure. After the patient has had a general anaesthetic, the ACL graft is obtained by harvesting two of the patients’ hamstrings tendons by detaching them from the upper tibia, through a 3-4cm vertical incision slightly towards the inner side of the upper tibia. The two tendons are folded over to create four “strands” and then sutured together and their combined thickness is measured, this is usually between 7mm and 9mm in width. Next, using special instruments and under arthroscopic visualisation, a tunnel that is fractionally wider than the measured ACL graft is drilled through the lower femur and the upper tibia in positions that will recreate the normal length and pathway of the original ACL. The graft is then pulled through both tunnels and secured to the bone in the tunnels on both sides. This anchors the graft to the bone mechanically, with the intention being that the bone will develop scar tissue over the next few months that will permanently hold the graft in place later on.


While the procedure itself is a fairly short one, the rehabilitation is much more lengthy and involved. Careful adherence to post-operative advice from Mr Robin and your physiotherapist is essential to ensure that the knee doesn’t become stiff from disuse, or alternatively the graft isn’t stretched or re-ruptured by excessive or aggressive movements too soon. While an accelerated rehab programme is used, most patients are rarely fit for return to competitive (contact or high speed non-contact) sport until 9-12 months post-op.

Mr Robin usually performs ACL reconstruction as an overnight-stay in hospital, but in specific cases it can be done as a day procedure. Immediately after surgery you will be permitted to bear weight on your operated leg, with the use of a rigid knee brace and crutches. The brace and crutches are required until good thigh (Quadriceps) muscle control returns and you and your physiotherapist feel that you are safe to hold the knee in a straight position. This is usually around 1-2 weeks. Over the following weeks, you will initially aim to control pain and swelling and then regain a full range of movement. Once this is achieved, the next emphasis is to regain muscle strength and balance control. By about 12 weeks post-op you can usually commence in-line running, e.g. on a treadmill/even ground, by approximately 5-6 months you may start running and “cutting”/pivoting and by 9 months post op you should be starting exercises to get you match ready but without full contact. By 12 months you should be aiming to be ready for full contact activity.


While ACL reconstruction is a very safe and highly successful operation, rarely complications can occur. Aside from the usual complications associated with surgery on the lower limb, specific to ACL reconstruction there is the risk of developing post-operative stiffness if the surgery is performed too soon (i.e. if you don’t have a full range of movement prior to surgery, you are less likely to achieve it afterwards) or if you aren’t diligent with your rehab programme. Alternatively, if the rehab is overly aggressive or uncontrolled, there is a risk of damaging the graft before it has a chance to mature, resulting in ongoing instability. Moreover the graft can be re-ruptured, usually by the same kinds of movements that would rupture the natural ACL. The donor site can be a source of pain and rarely nerve injury in this region can result in (usually temporary) numbness or pins and needles along the front of the shin, the instep of the foot or the outer part of the knee.

If Mr Robin repairs (but not removes/resects) a damaged meniscus at the same time as reconstructing an ACL then the rehab programme is modified to help protect the meniscal repair. This usually involves a slower progress to restoring the full range of movement over 6-12 weeks, but once this is done then muscle strengthening etc. can commence in a similar pattern to a regular ACL reconstruction.
The information above is general. All surgical procedures involve some risk. If you would like advice on your specific condition, please contact the office of Mr Daniel Robin, Melbourne Orthopaedic Surgeon.